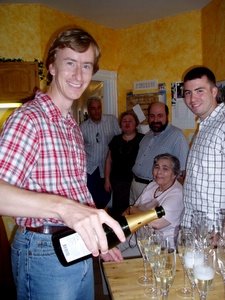 The time has finally come for the full disclosure. There was another reason I was quiet these couple of weeks. Registering people for classes and working on my winter teaching schedule surely kept me busy, but there was something far more engulfing and top secret than cooking classes. What was this undercover operation that had been occupying all my thoughts during the last few weeks? It was Jason's 30th birthday party.

When I tell you about all the obstacles involved in this project, you'll agree that CIA should offer me a job (and I don't mean the Culinary Institute of America).

My mission was to get our families to fly over to Boston the morning of the party without Jason knowing. Jason’s Dad was scheduled to come visit us this weekend, but Jason wasn’t expecting anyone else. The problems were

1) How to make enough food for 12 while pretending to be cooking for 4?
2) How to get everyone to arrive at the same time?

The cooking part was not too hard. I stayed home on Friday, made whatever I could in advance, and hid it in the back of the fridge. The day of the party, I was just "making lunch for Jason’s Dad" who was supposed to arrive at noon.

I used to wonder why people change the menu for private cooking class parties 10 times per week. "Can we have the lamb? Oh no, someone doesn't eat lamb! Can we do beef instead? And we really want to try that tart we saw on your web site – can you teach us to make it? Oh and the goat cheese – can we have goat cheese on the cheese plate? Actually, make it sheep (I am not sure if everyone eats goat)."

"What are they fretting about?" I always thought. "I am sure it will be just fine." But now that it was my own party, I was the one changing the menu 10 times. Here is what I finally ended up with:

The food preparation went without a hitch and Jason didn't give me a hard time about the amount of food I was making. Anything that would give it away – like 2 huge salmon fillets I kept wrapped in the fridge until the guests arrived.

Getting everyone to arrive at the same time was significantly harder than the food. My parents, brother, his fiancé, and my grandmother were flying in from Baltimore and Jason's Mom from Philadelphia. They were supposed to arriving around the same time, meet at the airport and take two cabs to an undisclosed location also known as Starbucks. There, they were to meet the other undercover agents: Jason's Dad, his wife Elizabeth, and our friends Gaia and Jerome. When everyone assumed their positions, they were going to descend on our place. The communication between the agents was going to happen over cell phones (how did people plan surprises before there were cell phones?!) The communication between the agents and the cell leader (that's me) was going to happen through a Russian speaking agent ( a.k.a. Mom) under the decoy of "buying fish".

11am – agent Mom calls. Jason picks up. Agent Mom: "I am here shopping for fish and I have a quick question for Helen." Jason gives me the phone. "I have good news and bad news," says Mom. "The good news is that we all made it. The bad news is that Louise's luggage didn't arrive. They said they'll put it on the next plane so it should be here soon. Will keep you posted."

11:30am – agent Mom calls. Jason picks up. Helen is in the shower. Jason asks if he can help Mom with her fish question. She says it's really specialized – something about a recipe I told her about when she last called. Helen tries to sound casual and make silly jokes about starting 1-800-buy-fish -- a buying fish support line. Meanwhile she is trying to rinse conditioner out of her hair and get out of the shower ASAP. She calls back agent Mom. "Luggage is here. We are taking cabs." "This sounds great. You should definitely grill it."

Everyone made it and Jason was completely shocked and moved when he opened the door.

Our lunch went on until 8pm. We laughed, cried, ate, drank, and told stories about Jason. According to the Russian tradition, the toasts were as plentiful as the wine. Jason's family is catching on to this talking/drinking ritual quite well. His Mom brought pictures of his birthday parties from when he was 3, 7, and 13 and we had a great laugh. And after her moving toast, we had a good cry.

What can I say? I am lucky to be married to an amazing man and to have such a great family and close friends to share these teary and joyful moments with.
Helen at 10:14 PM
Share