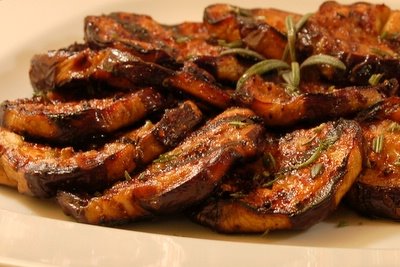 A few months ago, a Beyond Salmon reader asked me why she couldn’t find a single eggplant recipe on my blog. I have nothing against eggplants, I assure you, but they have fallen out of favor with Jason way before I knew him, so I’ve avoided cooking them ever since we met. But my knight in shining armor has been conquering all the weird veggies at a frightening speed. There are so few left that I am not sure what I am going to do once he starts eating them all. It’s always been a bit of a sport for me to get him to eat asparagus, cauliflower, beets, and other denizens of the vegetable kingdom, and I will miss the challenge of inventing the most irresistible, mouth-watering dishes to get certain veggies on Jason’s good side?

Getting an eggplant in our CSA share gave me excuse to use try the cooking technique I picked up from Chef Ruth-Anne Adams during my internship with her. Jason bravely ate a bite. And then another one. And then eggplant was no longer on the forbidden veggie list. In fact, it is now welcomed in our house with open arms.

What makes this recipe so good is the honey-garlic marinade. Honey on eggplant? Let me explain. You won’t really taste the honey, but it helps the eggplant caramelize on the grill. The results are musky and succulent. I am sure that when you try this eggplant you won’t have any shortage of ideas for serving it, but here are a few to get you started:

Note: Aleppo chili that this recipe calls for is available in Middle Eastern markets. It’s not spicy at all, but sweet and musky. If you don’t have it, substitute it with a pinch of Spanish smoked paprika, or skip it all together.