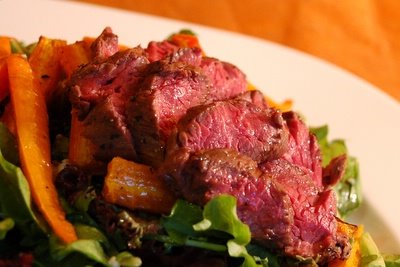 After sprinkling parmesan on the Swiss chard, and tossing the carrots with butter, I grabbed my media pass and re-entered my kitchen in a capacity of a journalist. My mission was to document the making of a steak by a man.

“We are ready, chef. Would you like to trim the steak?” I asked.
“Oh, you are welcome to do that part,” Jason said with a shy smile. “Actually, if you want, you can even season it for me.”
“But I thought I was only allowed in the kitchen as a fly on the wall!”
“Hey, all I said was that I’ll try to put the steak in the oven and take it out of the oven at the right time. I never claimed I can do all that other stuff.”

Oh well, so much for being the media. I put down my notepad, rolled up my sleeves, trimmed the steak, and sprinkled it with plenty of salt and pepper. The cast iron skillet was already preheating in the oven.

“The steak is ready for you, chef. What’s your timing plan?” I asked.
“30 second sear on one side, 30 second sear on the other side, and then 6 1/2 minutes in the oven at 500F.” This sounded reasonable considering the fact that our last steak was practically raw inside. Although the timing was barely longer than what we used last time, the steak was much thinner (only 1 inch instead of 1-2/3), so it all sounded about right. 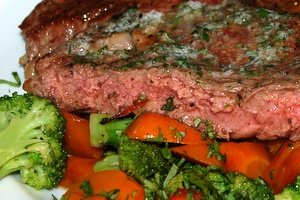 7 1/2 minutes later we were closely studying the finished steak like a team of doctors and fretting that its temperature was a tad too high (130F instead of our intended 120F). The 3 bites in the thicker part that came out medium-rare were excellent, but the rest of the steak that came out medium was on the dry side. This was grass-fed rib-eye, which is leaner than the usual grain-fed beef and terribly unforgiving. A few degrees under and you are chewing on raw meat. A few degrees over and all the moisture is sucked out of it. And with this high heat method, it was almost impossible to get the right doneness in more than 25% of the steak.

The bad news was that we still didn’t have the ultimate steak recipe even with the man at the stove. The good news was that I, representing all the meat-loving women of the world, still had a chance to redeem myself. Unfortunately (or fortunately) we were leaving for Montreal the next day and I had to wait whole 4 days for a rematch.

As we were driving back to Boston, I formulated my plan. It involved getting a ton of steak and beating this problem into submission. In computer science terms, this would be called “brute force”. Buying a ton of grass-fed rib-eye for $22/Lb seemed ridiculous, so I opted for a much cheaper grain-fed hanger steak for $7/Lb. It's a shame that hanger steak is not widely available because it is a superb cut of meat that combines flavor with tenderness. In the Boston area, Savenor’s market carries it on regular basis.

My strategy was to cause the meat as little heat disturbance as possible. I got this idea from the slow-roasted salmon that is cooked at 250F for 20 minutes (that’s long for a fish). This technique is not big on flavor (so it should only be done to very flavorful proteins), but it produces the most delicate melt-in-the-mouth texture. The connective tissue melts completely, leaving the flakes rare throughout and very tender. Since hanger steak does not need much help in the flavor department, I thought this idea stood a chance.

After a quick sear in a super hot pan, I removed the steak to a plate and let both the steak and the pan cool down for 10 minutes while preheating the oven to 250F.

I then seasoned the steak with salt and pepper, returned it to the pan and placed it in the oven for 14 minutes. Hanger steak is one of those cuts that are best medium-rare to medium. If left completely rare, the connective tissue does not have a chance to melt and the steak tastes chewy.

When I pulled it out of the oven, the thermometer was registering 125F on thicker parts and 130F on thinner ones. But the temperature didn’t go up as much during resting since the surface of the steak was not nearly as hot coming out of 250F oven as it was coming out of 500F oven. I made a small cut in one of the pieces to test for doneness, and left the other one untouched just to see if there would be a difference in taste between the cut and uncut piece. In a blind taste test, Jason couldn’t tell the difference between the two pieces and neither could I (though it was not a blind test for me). The juices leak out of the steak regardless of searing or leaving it intact. Even the butcher at Savenor’s market in Cambridge confirmed that not cutting into meat to save the juices is an old wife’s tale. 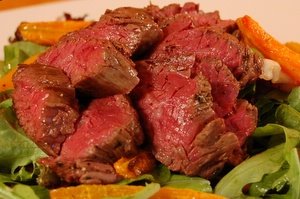 Ah, perfection at last. The steak was beautifully rosy from the surface to the center without a trace of chewiness. I specially didn’t put anything on this steak besides salt and pepper to really test the difference in texture and flavor. But I am sure that a nice red wine reduction or a generous pat of herb butter would have made it even better.

Another thing I liked about this method is that the difference in doneness between thick parts and thin parts of the steak was minimal. If your steak is not a perfectly rectangular block, you can still have every bite exactly as you like it.

Oh, and did I mention that testing for doneness was a breeze? Even if you thermometer does not end up perfectly in the center, you’ll get a close enough reading. Or you can “cheat” and simply cut half way into the center of the steak and take a peek. When steaks are cooked at high heat, they’ll cook much more during resting. So when you cut into a steak to test it for doneness, you have to do more guess work -- a steak that looks very rare at the time you take it off the heat might get to either medium or medium-rare during resting based on its thickness. But a steak cooked at low heat that looks rare at the time you take it off the heat will be just barely more done after resting than it was at the time you took it off the heat.

Whether this is the ultimate steak is the question only you can answer. As I now realize after 3 weeks of research and experimentation, there are two types of steak people –

Charred outside with rare inside also known as “black and blue” (big flavor but chewy)
vs.
Evenly red throughout (less flavor but tender)

Kind of like brownies – you are either a fudgy brownie person or a cakey brownie person. I tend to believe that food can be objectively evaluated, but even I have to admit that some things are a matter of taste. If you like your steak “black and blue,” slow-roasting is not a good technique for you. But if you want every bite to be juicy and smooth as butter, give this a try.

Hanger steak has a grizzle running through its center. Ask your butcher to remove it and trim all the silver skin and outside fat. You’ll end up with two cylindrical muscles (a thick one and a thin one).

If you can’t find hanger steak, try this recipe with skirt steak, rib-eye, tenderloin, or pretty much any other steak. The timing will vary, so I suggest you start testing your steaks after 10 minutes in the oven per inch of thickness to be on the safe side.

1 hour and 15 minutes before serving
Take the steak out of the fridge and let it sit at room temperature for 45 minutes. This will help it cook more evenly.

25 minutes before serving
Preheat the oven to 250F.

Cut the steak into pieces that can fit comfortably into the skillet (about 4 inches long). Dry the steak very well on paper towels.

Set a heavy-bottomed skillet over high heat until very hot, at least 3 minutes. Add canola oil. As soon as it starts to smoke, place the steaks into the skillet in one layer without crowding. Cook without moving for 1 minute. Flip and cook without moving 1 more minute.

Remove the steaks to a plate and take the pan off heat. Cool the steaks and pan for 10 minutes. The steaks will release lots of juices – you can reserve them for making the sauce.

Season the steaks generously with salt and pepper on both sides. Return the steaks to the skillet and place in the oven for 12 minutes (for an average hanger steak). 5 minutes before estimated cooking time, put a plate in the oven to warm up.

Remove steaks to a warm plate, optionally top with a dollop of garlic-herb butter, and cover with foil. Let rest 3 minutes. If you want to make a simple pan sauce, you can deglaze the pan set over high heat with steak juices, red wine, broth or water. After taking this reduction off the heat, swirl in a dollop of butter.

Note on alternative timing
This recipe takes a bit of planning, but you can use the time lags to your advantage when making these steaks for company. Instead of bringing the steak up to room temperature before searing, sear steaks right out of the fridge, then cool, and refrigerate. When your guests arrive, remove steaks from the fridge and let them sit at room temperature for 45 minutes while serving drinks and appetizers. Then season the steaks and put them in 250F oven for 12-15 minutes. If cooking for a large crowd, you can sear steaks in batches and then finish them on a large baking sheet.
Helen at 11:30 PM
Share